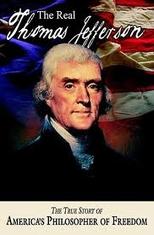 The Real Thomas Jefferson: The True Story of America's Philosopher of Freedom

Jefferson is the central figure in American history, and...he may yet prove to be the central figure in modern history. So stated noted historian Henry Steele Commager. And as the English novelist Samuel Butler once wrote, Though God cannot alter the past--historians can. His observation is especially applicable to our changing perceptions of great historical personalities, most of whom are relentlessly reinterpreted by each new generation of biographers.

There is no better example of this kind of metamorphosis than Thomas Jefferson, author of the American Declaration of Independence and third President of the United States. Since his death in 1826, he has been alternately vilified and deified by writers of varying motivations. In The Real Thomas Jefferson, by allowing Jefferson to explain his life and ideas in his own words, we have tried to ensure that his spirit, not ours, will breathe in these pages so that all who read them will become acquainted with Jefferson himself -- not another second-hand interpretation. His biography is set forth in Part I, and Part II brings together the most insightful passages from his writings, arranged by subject.