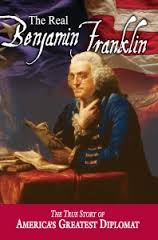 The Real Benjamin Franklin: The True Story of America's Greatest Diplomat. There are many Benjamin Franklins -- or at least he has taken on many different forms in the history books of the last two centuries. Some historians have shown us an aged statesman whose wise and steadying influence kept the Constitutional Convention together in 1787, while others have conjured up sensational tales of a lecherous old diplomat. Unfounded myths are now being repeated and embellished in school textbooks and educational television programs.

Which of all these Benjamin Franklins, if any, is real? This book is an attempt to answer that question. The Real Benjamin Franklin seats us across the table from the one person who really knew Benjamin Franklin -- that is, Franklin himself -- and gives him an opportunity to explain his life and ideas in his own words. Part I of this book details his exciting biography, and Part II includes his most important and insightful writings, all carefully documented from original sources.